B’nai Jacob is a warm and welcoming Jewish community in Jersey City. A place where friends and family connect with each other, engage in meaningful prayer, and discover new ways to celebrate our traditions and culture. 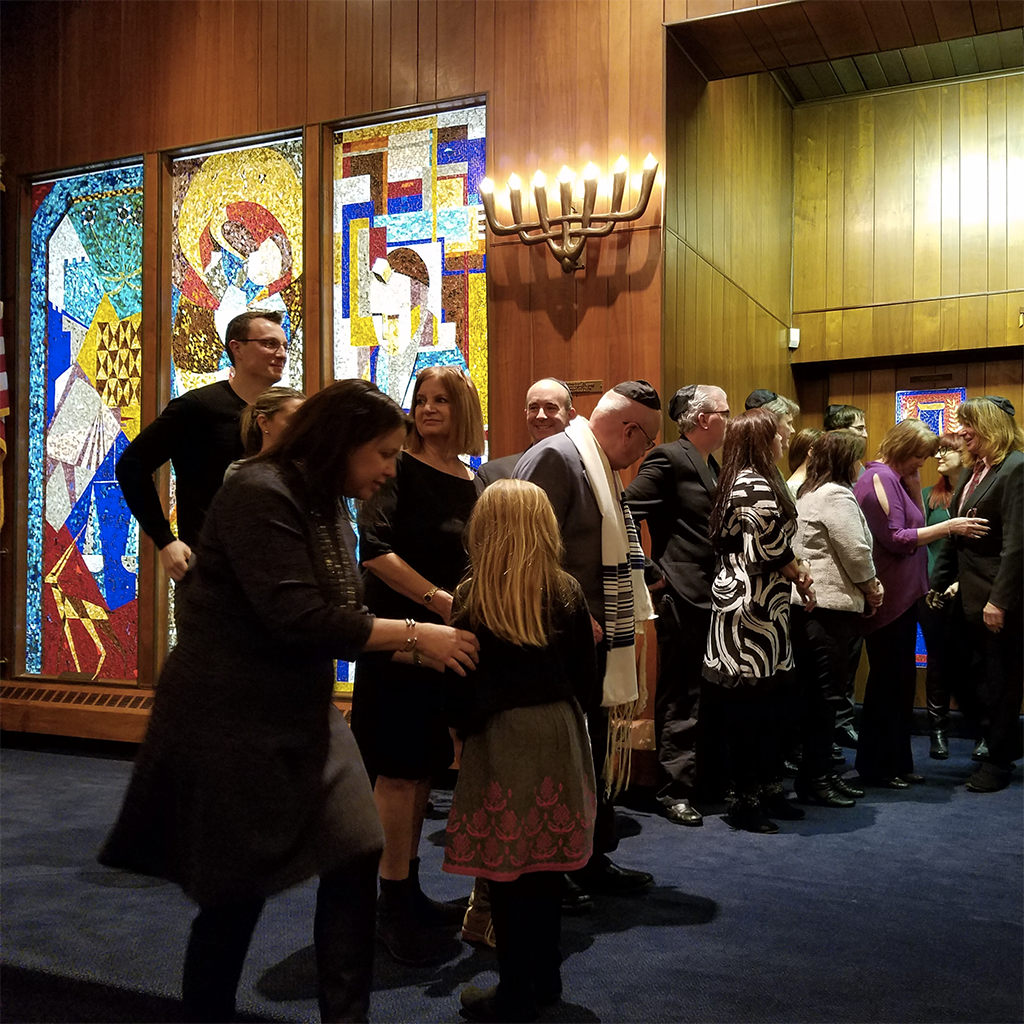 B’nai Jacob is a warm and welcoming Jewish community in Jersey City. A place where friends and family connect with each other, engage in meaningful prayer, and discover new ways to celebrate our traditions and culture. We celebrate Judaism in a vibrant, fun, creative, warm and life-affirming manner and welcome all with warmth and hospitality. We support the State of Israel and acknowledge its vital importance to our congregation and the Jewish people. We embrace the diversity of our community and strive to be inclusive and cohesive, caring and welcoming.

Congregation B’nai Jacob thanks the Violet Zall Hordes Foundation for their generous grant to support our religious programs and services.

Thank you to the Jewish Federation of Northern New Jersey’s Hudson County Regional Council for their support!

We mourn the passing of Rita Brody

Rita Brody of Boynton Beach, Florida, formerly of Jersey City and Tenafly, New Jersey, passed away peacefully on April 4, 2020.  She was 88.

Rita was born in Jersey City on October 6, 1931, to Sol and Peggy Schustrin.  Rita was the devoted wife of her late husband of 68 years, Harvey, and was predeceased by her loving sisters, Carol Starr and Libby Shapiro.

Rita was an avid card player, baker, golfer and returner.  Together with Harvey and her parents, she was a co-founder of Congregation B’nai Jacob in Jersey City and a President of the Jersey City chapter of ORT America.  Her greatest joy, however, was her time spent with her grandchildren who lovingly called her Meme.

Under the present circumstances, her burial was private and a memorial will be celebrated at a later date.

The family has requested that those wishing to make a charitable donation in Rita’s name do so by donating to Congregation B’nai Jacob, 176 Westside Avenue, Jersey City, NJ 07305

As Jews, Jersey City residents, Congregation B’nai Jacob congregants and Americans, our hearts are broken by this week’s events in our city. The senseless slaughter of Jersey City Police Detective Joseph Seals, followed by the deliberate attack on a Jewish business resulting in the death of Moshe Deutsch, Leah Ferencz and Miguel Douglas Rodriguez, are tragedies none of us will ever forget. We join other communities and houses of worship in prayer for the families who have lost their precious loved ones in this terrible week.

Trying to make sense of this, my thoughts turn to my grandfather, Chaim (“Hymie”) Siegel. Though he died before I was born, he animated my life through family stories. Chaim came to this country as an immigrant and suffered great poverty. He left school at 14 to work full time at a printing and engraving shop called Turner Brothers; he would work there for the rest of his life
.
When he was 45 years old, the Turners wanted to sell the business. Chaim, an ambitious and frugal businessman, managed to raise the munificent sum of $800 to buy it. But he feared their many elite clients would not want to do business with a proprietor named Chaim Siegel. So, he went to court to change his name to Herbert Turner. Grandfather was formidable. He made his adult children, who sometimes helped him in the shop, change their names too; thus, the concealment of Jewish identity was completed.
Among our family records are legal papers that show the name-changes and the Turner Brothers bill of sale. Grandfather ran Turner Brothers successfully until the day he died on the shop floor. Was the name-change necessary? I don’t know. I do know Grandfather’s documents convey a fundamental tension in the Jewish-American story: we have great success, and yet we are the “other”: sometimes respected, sometimes a curiosity, sometimes despised.

For the most part, we have long enjoyed our American success in safety. Then came Pittsburgh. Then Poway. And now this week in Jersey City we have been reminded in the most violent way of our “otherness.” Of course, Jews are not the only “other” in American life; African Americans have long suffered violence as the “other”; the terrible shooting in El Paso had a “goal” of killing Hispanics.

We can take heart and strength in knowing that local and state government stand with the Jewish community. Love, tolerance, community, action, teshuvah,tefillah and tzedakah: these are ways forward in this difficult time. 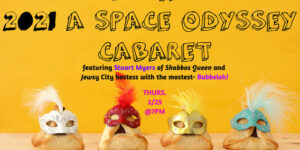 That’s right, we are just over a week from Purim, and while it may not be the actual title of the Shpiel (there are ALWAYS surprises)– the theme is just … 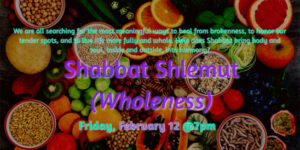 SHABBAT B’SIMCHA: MAKE A JOYFUL NOISE (Friday, February 19th @7pm) What did Jewish tradition have to teach about the sacred power of joy? This Shabbat we will be spending a lot … 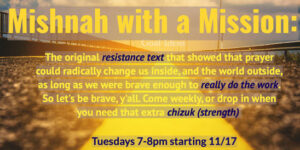 Tuesday night @7pm we continue with MISHNAH WITH A MISSION This week we are continuing our deep-dive into that revolutionary prayer, The Shema, and how the whole is more cosmically … 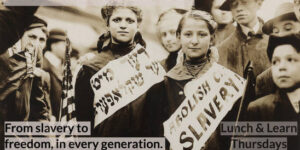 THURSDAY@12:30pm we continue with our Lunch & Learn Series on The Book of Exodus This week we are examining a complicated legal and spiritual vision for what Shlemut (Wholeness) could … 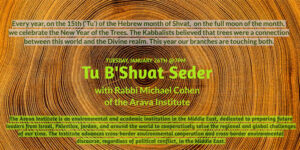 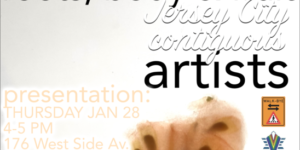 THURSDAY 1/28 FROM 4-5PM we have the OPENING PARTY for RADEKEL: Roots, Body & Fruit, a Tu B’Shvat collaboration between Walk_Bye curator Catalina Aranguren and CBJ!! Come to the backyard of CBJ … 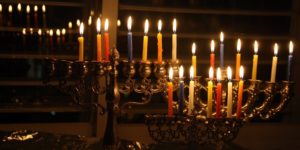 We have a lot of fun and meaningful events planned which you will be hearing about more, but just a sampling: Thursday, 12/10 @6:30pm 1 Year Late: Reflection and Solidarity (a memorial …

halom chevre (friends)! You hear us, it’s really happening… LIVE FROM JERSEY (or was that JEWSY) CITY IT’S….SIMCHAT TORAH!!!! For generations our people have celebrated the completion of the yearly reading … 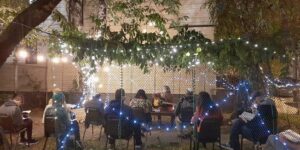 Shalom chevre (friends)!  Chag Sukkot Sameach! Happy Sukkot, the holiday in which we commemorate our experience as wanderers in the wilderness and our connections to the natural cycles of the … 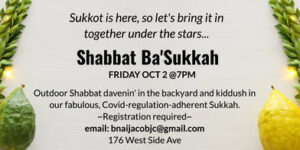 Shalom chevre (friends)! Wow, this High Holy Day season was truly something….well, as our president Michael Zwain put it, TREMENDOUS. The list goes on and on about why, but it …